Brussels, 2 February 2018 – The Kick-off Meeting of the ERN-PAEDCAN Partner: Paediatric rare tumours network – European registry project was held just after the ERN PaedCan General Assembly on 2 February 2018 in Brussels. PARTNER is one of the five projects funded by 3rd Health Programme. Five EU countries involved as Associated partners and 18 as Collaborating partners, including 9 Centres from Low Health Expenditure Average Rate (LHEAR) countries, 2 non EU countries and 1 parent’s organization work together and are looking for a novel solution in the field of virtual integrated healthcare system.

The project was judged innovative because it will create a Paediatric Rare Tumour European Registry (PARTNER) dedicated to children and adolescents with VRT (Very Rare Tumours) linking the existing national registries and providing a registry for those countries not already having a registry for VRT in place. The European Registry will be an essential part of the activity of the VRT subnetwork part of the ERN PaedCan. The possibility to link the registry with a virtual consultation system and the elaboration of diagnostic/treatment recommendations will create a platform that can be easily accessed by EU Health care providers. The increasing expertise in VRT based on the data collected in the European registry will increase the capacity to provide international consultation and define standard of treatment recommendations. This will ultimately result in improved patients’ care and reduce currently existing inequalities in cancer outcome across EU member states.

The Kick-off Meeting was welcomed by the Project Scientific Coordinator, Professor Gianni Bisogno, who presented PARTNER to the consortium starting from the Logo concept idea and the geographical distribution of the consortium members. Professor Gianni Bisogno gave an overview of the whole project, comprehensive of the tasks of each WP and Partner, and then each Leaders of work packages had the chance to present their organization, the role they will have and the activities they will carry out during the project.

A Technical round table followed, with the presentation of the challenges, objectives and the steps to be taken during the project, with a focus on the activities to be carried out in the next 12 months.

Luxembourg, 17 April 2018 – The PARTNER members gathered together for its 1st Consortium meeting after the project’s kick-off in February. The meeting, hosted by the CHAFEA, the Consumers, Health, Agriculture and Food Executive Agency, took place on 17th April 2018 in Luxembourg just after the Rare Diseases Registries Projects’ Kick-Off Meeting.

During the meeting issues concerning all the working groups and tasks are discussed. The leaders of the WPs presented the status of the works concerning their focus areas, then the whole consortium could continue the development in order to deliver the deliverables and achieve the milestones by the end of the first year of the project.

For what concerns the technical aspects of the PARTNER project, methodologic issues were raised and discussed, regarding both the drafting of VRT guidelines and the identification of a list of variables to be included in the European database. Among several options in use in the scientific community and reported in the literature, the more appropriate methodologies to drawing up guidelines for VRT have been elucidated and it has been collegially decided to circulate a document for the final approval. On the other hand, the list of variables is currently in progress, and it will be defined after the classification and evaluation of the lists of variables collected in the already existing national registries.

Finally, the consortium decided to meet again on September 2018.

Gdańsk, 14 September 2018 – The 2nd PARTNER Consortium Meeting was held in Gdańsk on the 14th of September 2018 in the first half of the day. The event has been hosted by the Gdanski Uniwersytet Medyczny (GUMed) team led by Dr. Ewa Bien at the Atheneum Gedanense Novum premises. Each partner involved in the PARTNER team has presented its achievements in the context its research activities and has assessed the general progress made on the project. 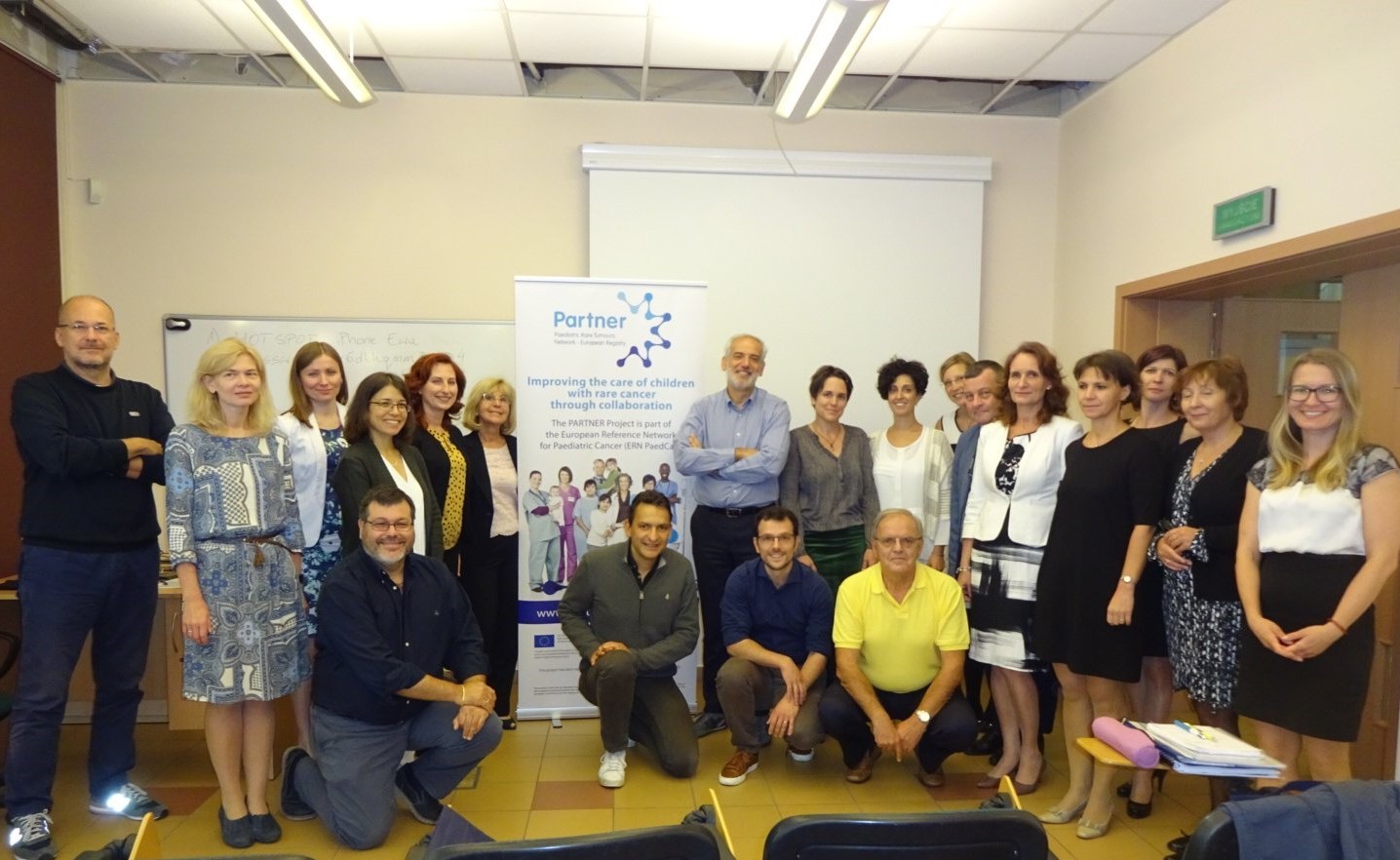 21 members of the 6 Associated partners and 6 Collaborating partners of the Consortium attended the meeting and collectively reviewed the Work Packages progress in the past months. The first session was devoted to six interesting and productive panels organised during the meeting allowing the participants for more insightful discussions.

The panels were devoted to the following topics:

Professor Gianni Bisogno, Project Coordinator of the PARTNER project caught the attention of the consortium with valuable scientific recommendations and useful input for the dynamics and progress of the project.

Finally, the consortium decided to meet again on January/February 2019.

Brussels, 30 January 2019 – The 3rd PARTNER Consortium Meeting was held in Brussels on 30 of January 2019. Nearly one year after the launch of the project, this event has been a great opportunity for participants to present the progress of their work and exchange on their findings and methodologies, as well as to plan future actions. This event has been organised by Prof. Gianni Bisogno (AOPD), Ines Brecht (EKUT) and Andrea Ferrari (EXPeRT), with the support of the The SIOP Europe office.

The second session of the meeting organised by Dr. Ines Brecht (EKUT) was focused on Harmonization of data acquisition of the existing European registries. The main discussion of the 2nd Consensus meeting on harmonization of data acquisition was about the national registries which must report the tumour entities and variables included in their national data registries. The final goal of the partners is to reach an agreement on the entities to be collected and the variables of the existing registries. This shall be done in close cooperation with AOPD (leading WP5) and IT experts who has been invited to attend the meeting. 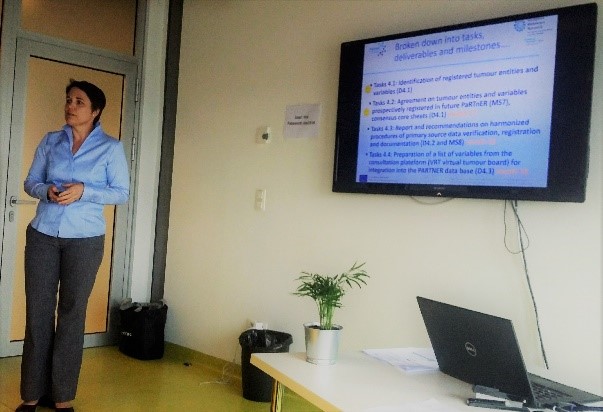 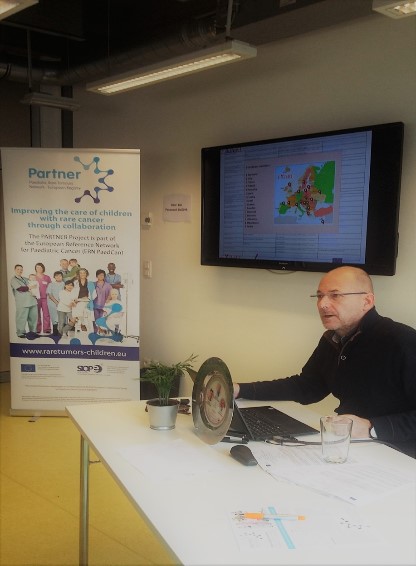 The third meeting was organised by Dr. Andrea Ferrari (Istituto Nazionale per la Cura dei Tumori), chairman of the European Cooperative Study Group for Pediatric Rare Tumors (EXPeRT) and was focused on rules of membership and on the programme of the SIOP Europe 2019 Annual Meeting in Prague (May 2019) and on EXPeRT retrospective studies and publications (Salivary Gland Tumors, Mesothelioma, project on Molecular profiling for rare tumours). 30 members of the 30 participants from 16 institutions attended the meetings and collectively reviewed the Work Packages progress in the past months. Finally, the consortium decided to meet again on June 2019 in Tübingen, Germany.

Tübingen, 7 June 2019 – The Consortium was gathered in Tübingen for the 4th PARTNER Consortium Meeting. The event has been hosted by Eberhard Karls Universität Tübingen (EKUT) team led by Dr. Ines Brecht at the the Crona Hospitals of Tübingen. Topics included discussion of current status and plans for the coming series of collaborative activities as well as dissemination through future participation in conferences and publication of results. The advisory board members joined the general assembly session in the morning to get an overview of the course of the project. It was concluded that the third semester of PARTNER has bee

n very successful. All project partners continue to have a high motivation to collaborate and to achieve high-level results. Technical results have already been achieved, which is also underlined by 3 journal papers and 8 conference papers submitted in the first project year. The work is running according to the schedule. The advisory board members expressed their satisfaction with the course of the project and provided valuable comments concerning exploitation and further activities.

The second part of the day was focused on IT Consensus meeting – Creation of a European registry for paediatric patients with very rare tumours and harmonized procedures of data registration organised by Dr. Ines Brecht. Technical IT matters and solutions were discussed, and fruitful outcomes emerged for the progress of the project implementation. 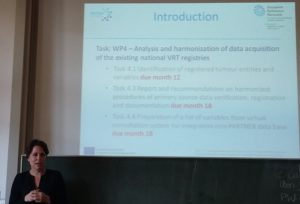 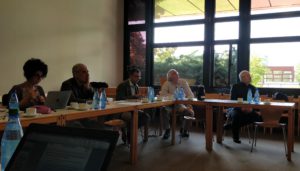 In total 22 representatives participated in the meetings, both personally and virtually, and all project partners were represented. The meetings were characterized by high motivation and a friendly and collaborative atmosphere. 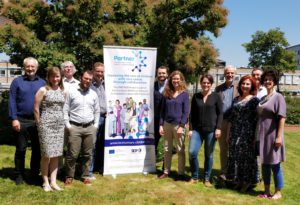 The results achieved and the tools developed within PARTNER are being disseminated through strategic collaborations (joint events, position papers, etc.) with organisations at European and international levels. These partner organisations reflect the target groups identified for PARTNER dissemination and are presented below: